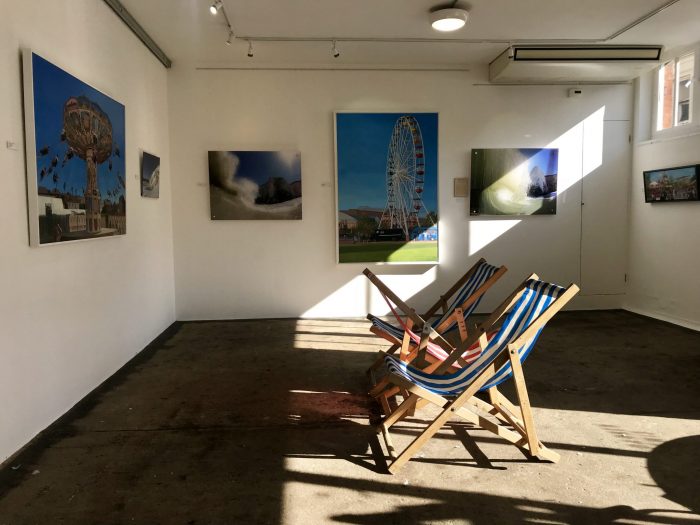 This is Darren and Ross’ third joint exhibition at the Pie Factory Gallery following their successful previous exhibitions titled ‘Sand, Sea and Light’ in 2016 and ‘In and Out the Sea’in 2017.  The exhibition ‘Sand , Sea and Light’ gained interest by BBC reporter, Robin Gibson, and was featured on BBC South East News Today on Monday 26thSeptember 2016.

This new exhibition, Thrills and Spills brings together all the fun experiences and aspects of our coastline.  Darren depicts, with traditional methods of oil paint, the Thrills of the obvious fun seeking activities within Margate’s Dreamland Vintage Theme Park, including past childhood memories of white knuckle rides at the height of its success in the then named Bembom Brothers Theme Park during the 1980’s.  As one of Britain’s oldest seaside resorts, Margate has already enjoyed two centuries in the spotlight as a place for fun seeking excitement.  Margate has been welcoming day trippers and holidaymakers since the early 1700’s.  But Dreamland is not the only thrill-seeking experience on offer, many come to the town to experience and observe the famous Margate light and jaw dropping sunsets which Darren records in his paintings.  The thrill of being within the landscape, be it, a Theme park ride, a sunset illuminating into Margate’s serene harbour or a cliff top view of the expansive sea and sand is captured in Darren’s paintings. Ross offers extreme photography to record the power of the sea at its most exhilarating, capturing the thrills of being in our sea from a unique viewpoint.    Ross experiences his own version of white-knuckle rides by physically immersing himself within the power of the sea providing unique imagery as he rides the waves and spills surrounding us.  The two artists sometimes use the same subject matter but from very different approaches, perspectives and disciplines.