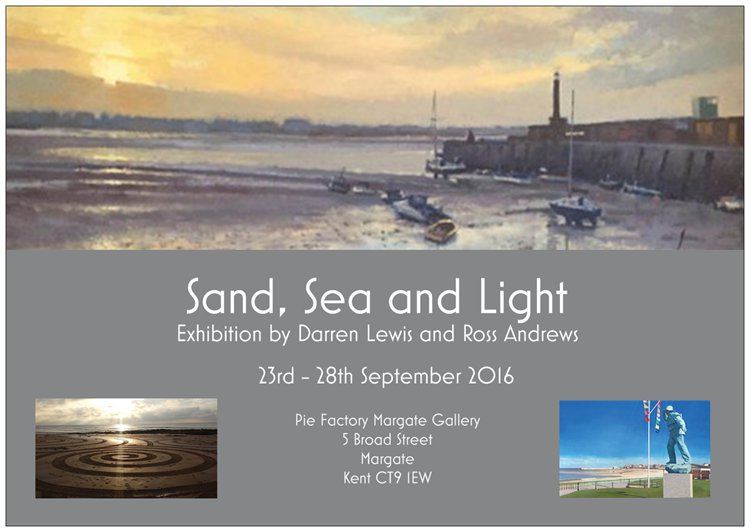 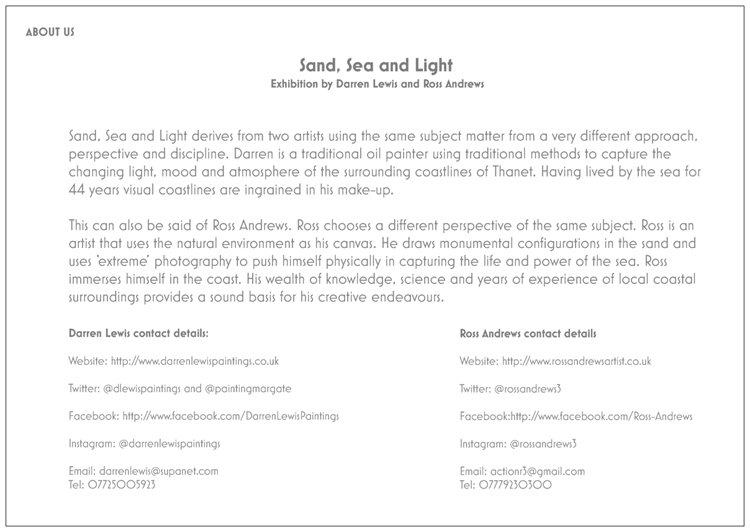 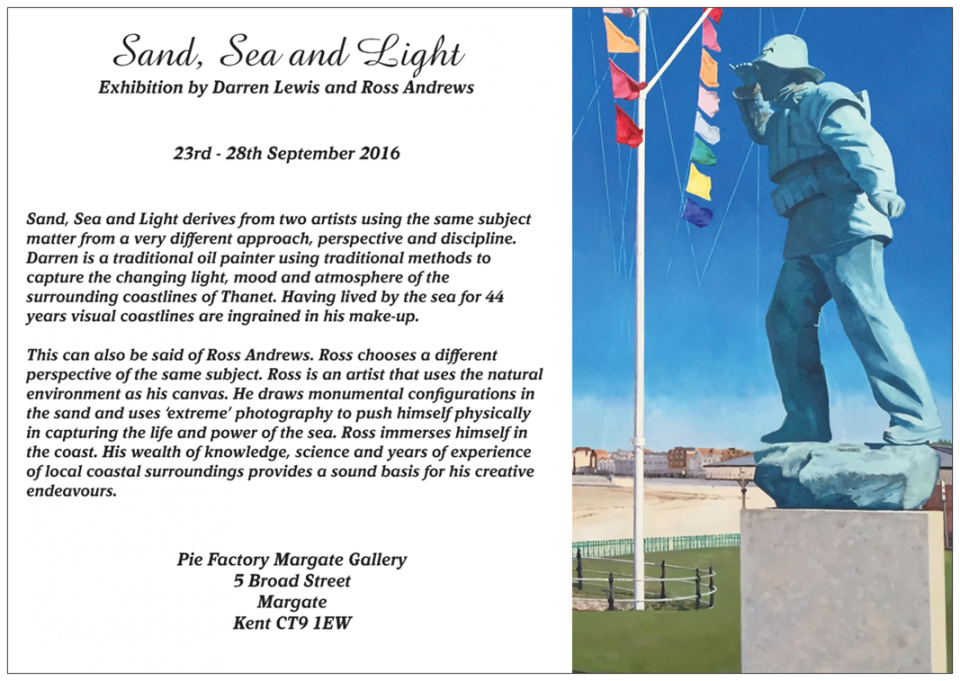 Sand, Sea and Light derives from two artists using the same subject matter from a very different approach, perspective and discipline.  Darren is a traditional oil painter using traditional methods to capture the changing light, mood and atmosphere of the surrounding coastlines of Thanet.  Having lived by the sea for 44 years visual coastlines are ingrained in his make-up.

This can also be said of Ross Andrews.  Ross chooses a different perspective of the same subject.  Ross is an artist that uses the natural environment as his canvas.  He draws monumental configurations in the sand and uses ‘extreme’ photography to push himself physically in capturing the life and power of the sea.  Ross immerses himself in the coast.   His wealth of knowledge, science and years of experience of local coastal surroundings provides a sound basis for his creative endeavours.

Essentially, Darren Lewis is a painter from Margate and a painter of Margate. Darren exhibits traditional oil paintings capturing the varied light and atmosphere of Margate Harbour and the surrounding coastlines.  Darren uses strong colour to emphasise the beauty of his chosen locations of the coast.  Living in Margate, he paints the things he sees around him, the things he knows well and is comfortable with.  Darren responds to nearby coastlines of Thanet, with a focus on the vistas of sand, sea and sky of chosen locations. Darren’s work sits traditionally in seascapes, expressing with a command of colour, the qualities of light and form of his chosen locations.  Locality remains critical in his approach to all his work expressing his particular perception of his instant surroundings. 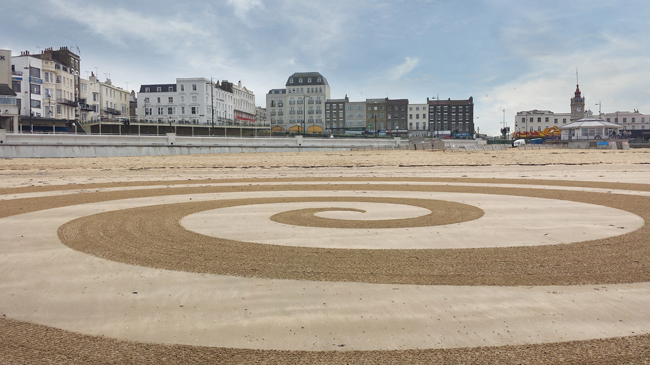 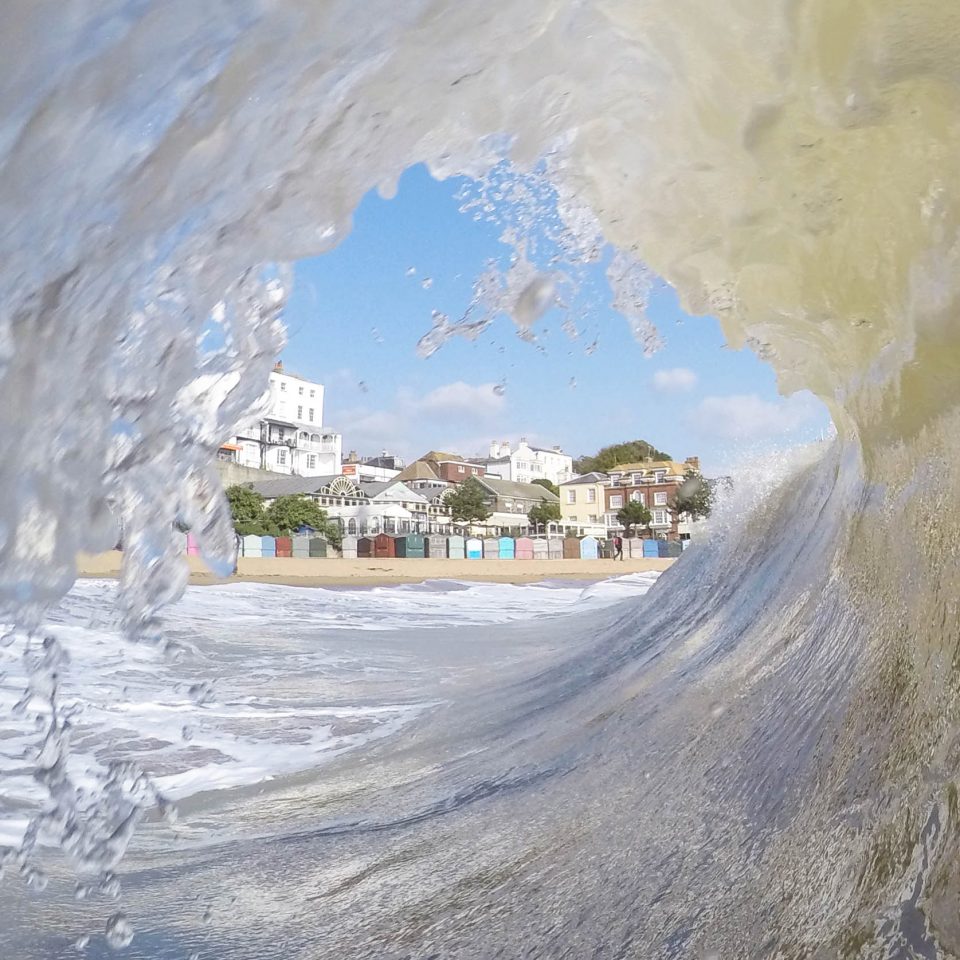 Ross is an artist that uses the natural environment as his canvas. He draws monumental configurations in the sand and uses drones to photograph and document his resulting work.  Ross works with but often against the natural elements and as a result makes his art ephemeral. Most of Ross’ work is on a freestyle basis, often with no idea of planning but a visualization that feels right at the time in location. As he is unable to see what he is drawing, due to the scale and close proximity, he hopes that what he has visualised appears across the very large canvas he is using. The race against the tide and physical demands needed creates exhilaration and excitement into each piece. Whilst the overhead shot of the final piece can look impressive Ross is aware of the environment and what is going on around him.

This is also seen in his ‘extreme’ photography; where he pushes himself physically to capture the life and power of the sea. He encapsulates the waves in full force and offers a new refreshing view, unseen by many, of his chosen coastlines.